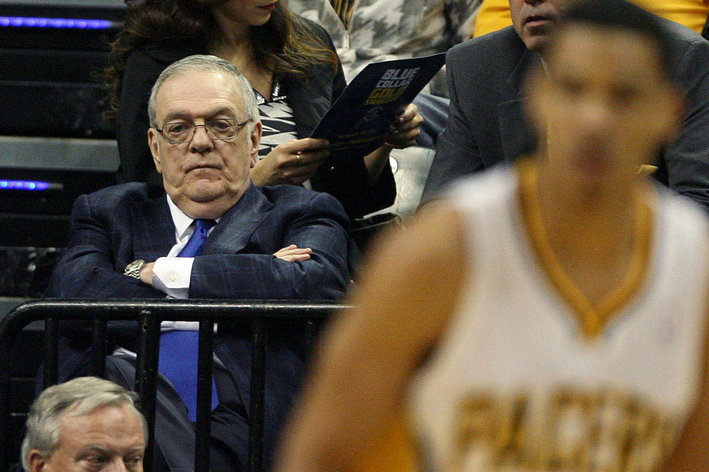 During his prime, Donnie Walsh was the king among mid-market executives.

Running the Pacers personnel for over two decades, he had a streak of 17 seasons with only one missed playoff run, including six Eastern Conference Finals appearances. He did what Joe Dumars could not do for the Pistons, which was transitioning from one contending squad to another.

The style of teams that Walsh helped build with the Pacers should look familiar to Pistons fans. The teams were usually one of the slowest paces in the league, led on the defensive side of the ball with a physical and often times intimidating style.

In the late 90s, Walsh's Pacers were regularly winning over 50 games and threatening to break through in the highly competitive Eastern Conference, culminating with a Finals appearance in 2000. He built the squad mostly through the draft (Reggie Miller, Rik Smits, Antonio Davis, and Dale Davis) with a trade for Mark Jackson to help put them over the top.

As his core got older, he gradually dismantled - again primarily through the draft and trades. He traded for Jalen Rose, and added Al Harrington and Jeff Foster from the draft. Perhaps his greatest coup was trading a 30-year-old Dale Davis for the 21-year-old Jermaine O'Neal, who would be the cornerstone of the next contending core.

But he made a Dumarsesque mistake along the way. In 2000, he extended Austin Croshere and Jalen Rose for a combined $144 million. He was able to get out of his mistake with Rose soon after with a salary dumping move to the Bulls for Ron Artest and Brad Miller, but Croshere would be a sunk cost. He seemed to have learned his lesson from it though, at least during his time with the Pacers, as he wasn't guilty of any other colossal boondoggles in Indianapolis.

In 2003, Walsh took Larry Bird under his wing in the front office by splitting the decision-making duties. Walsh essentially collaborated his way out of a job, as after a few seasons Bird took on a greater amount of the front office responsibilities, especially in the wake of the team's gutting after the Pacers-Pistons brawl.

Jim Dolan offered Walsh the opportunity to clean up Isiah Thomas' mess in New York in 2008, and Walsh accepted the high profile job. He immediately focused on clearing up the team's cap space nightmare, hired Mike D'Antoni away from the Suns, and built a base of young talent. After a pair of crummy years, Walsh was essentially overruled by Dolan to cash in the assets he had built up in on Carmelo Anthony and Amar'e Stoudemire. He also made the curious decision to let David Lee walk to the Warriors, presumably to keep salary free for the summer of LeBron - although how much of that was his choice and how much was Dolan's is anyone's guess.

Walsh walked away after the 2011 season, not receiving his request from Dolan to have final personnel decisions and not accepting Dolan's request to commit for two additional seasons (at a pay cut) - although he did stay on in a consulting role. With an intrusive buffoon of an owner and a franchise preferring big names, flashy offense, and quick fixes over defense and sustained development, it was a poor fit from the beginning. But despite the lack of success out of the rebuild, it'd be unfair to label Walsh's rebuild in New York as a complete failure.

When Bird stepped down from President of Basketball Operations for health reasons in 2011, Pacers owner Herb Simon asked Walsh to come back to the Pacers once again. With the key pieces already in place, Walsh contributed only small additions of role players until Bird returned to the job in 2013. Since then, he's stayed on with the Pacers as a consultant.

Conclusion
Pros: Experienced and successful in a small market with a style of play similar to that which has worked for the Pistons. Well-known, highly respected. Has a record of successfully bringing in an heir apparent - perhaps Chauncey Billups could be his next?

Cons: 73 years old, hasn't really been successful in the past decade, and has some colossal free agency bombs on his record. You're basically just hoping for a Joe Dumars who's still got it.
Dirige @DetPistonsFR / Just a kid chasing his dream.
Haut


“My percentage is terrible,” he said after the Palace finale on Sunday — a 116-107 loss to the Raptors. “It’s not easy to sit for five, six games and then play maybe 5 minutes of garbage time.”

“I knew that it was difficult. Back in Italy, I could wait until the game come to me.”

"Some people did not like this ceremonial style. But after all when you have to kill a man it costs nothing to be polite." (W. Churchill, déclaration de guerre au Japon, 8 décembre 1941).
Haut
3404 messages